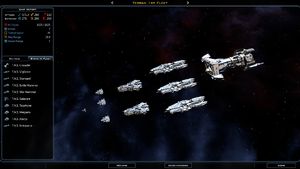 The 1st Fleet after returning to the galaxy

The Terran Alliance 1st Fleet is a Terran fleet.

The 1st Fleet played a crucial role in the war against the Dread Lords and Drengin. It successfully managed to retrieve and use the Salvation device that surrounded Earth in its protective Precursor shield preventing the Drengin from invading the planet. In the process Admiral D.L. Bradley decided to take the remains of the fleet into the pocket universe that had imprisoned the Dread Lords, saving the fleet.

After 16 years in that universe the 1st Fleet returned to the galaxy near the planet Arcea. It was led by the T.A.S. Crusader, which utilized an advanced Precursor artifact called The Bane making it the most powerful ship ever built by Humanity and in turn made the 1st Fleet a very formidable force.

After arriving near Arcea the 1st Fleet rendezvoused with the Terran Remnant fleet. Bradley placed Commander Marcus Cory from the Terran Remnant in command of the force and tasked them with liberating Arcea. Once done the 1st Fleet spearheaded the Alliance's drive through Drengin space and towards Earth. Once done the Crusader activated another Precursor artifact and removed the shield that had protected Earth, fulfilling the mission they had returned to the galaxy for.