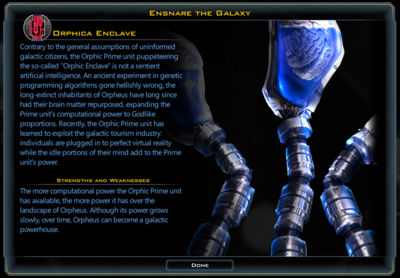 The Orphica Enclave won the 2015 Faction Contest, earning a place in the official game and $1,000 for creator Psiyon.

The faction design contest was a competition run by Stardock, where GalCiv III players submitted their custom-made factions for a chance to win $1,000 and be included in the game as a minor race.

Players could submit their race in two ways:

Stardock chose eight finalists and four honorable mentions to be voted on by the community. Note that the factions were made for version Galactic Civilizations III Beta 6, so compatibility of the factions with newer versions is questionable with the links provided for those factions.

The community was able to vote for three of the eight finalists. At first, voters were also able to download the races. But due to announcing the finalists at about the same time as releasing a new version of the game caused incompatibility problems, so the links were removed. The top vote-getter, Orphica Enclave, was declared the winner.

The Orphica Enclave by Psiyon was judged the most worthy by the community. Psiyon won $1,000, and the Enclave will be included in Galactic Civilizations III as a minor faction.

Psiyon was also entered into the Hall of Fame along with previous Stardock contest winners.

Downloading the other factions[edit | edit source]