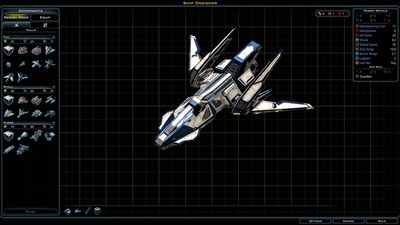 The ship designer in Galactic Civilizations III gives players the ability to design their own custom ships for use in their civilization.

Galactic Civilizations III (at least the Steam version) is integrated with the Steam workshop and allows the sharing of ship templates. The "Steam Workshop" button at the bottom of the screen will open the workshop and allow players to download hull templates (these ships are not equipped and will appear in the hull templates panel not in the build list). Custom designs can also be uploaded when saving them.

Cheap Colony Ship/Cheap Constructor: Early on in the game, it can be useful to build cheaper versions of constructors and colony ships such as when you decide to colonize Mars or other close planets. This is also important for rush buying a colony ship/constructor since the BC cost will be low. 1. Use Cargo Hull 2. Add Colony Pod/Constructor Pod. Do not put any engines or life support 3. Use Small or Tini (with technology that increases capacity) Hull. Their cost is even less.

Heavy Constructor: Having more then one constructor pod allows you to build up starbases cheaper and faster because you do not have to build an additional cargo hull. 1. Use Cargo Hull 2. Add two or more constructor modules 3. Add engines and if needed life support (you will rarely need life support on constructors since they tend to be used for starbases in your influence).

Population Shuttle: Your population is the basis of your production. If you notice you have low approval on one planet or you would like to have more production on a planet, then you can use this ship to shuttle population around. You will not use up a transport module or colony module as long as you land on a planet you already control. 1. Use Cargo Hull 2. Add 2 Colony Pods (Transport Modules after Planetary Invasion) 3. Place engines and life support as needed.

Static scout: A stationary ship equipped with just sensors is an easy and cheap way to keep eyes on an area. But if you see too far out, each turn takes longer to process since the game will show you all movement and all fights in range.