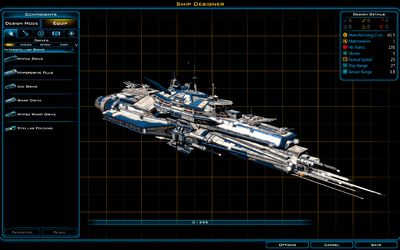 The ship designer contest was a competition run by Stardock during the Early Access period of Galactic Civilizations III. Stardock chose eight finalists to be included in the base game and honorable mentions, after which the community voted for the ultimate winner to win a $1,000 cash prize.

With the launch of Galactic Civilizations III five of the eight ships were included with the game, with two of the designs (including the winning entry) appearing in the starting fleets of the second and third mission of the campaign. In the dev stream on 22nd of May, 2015 Paul Boyer stated that the other three had yet to be converted into a stable format for the game.

In the 11th of September dev stream Boyer when asked about the current status of the ships Boyer announced that he was looking at involving the ships in the campaign in the expansion and as such they were unlikely to be added to the game until then. He also stated that they were thinking about holding another ship contest and that the winners would also be used for the campaign.

As of game update 1.6 and the Mercenaries Expansion the remaining design contest finalists had still yet to be added to the core game.